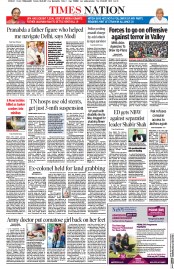 UP youth with disability tied to bike, dragged for plucking flower

Agra: In a shocking incident, a person with learning disability was allegedly tied to a motorcycle by a local goon and dragged for nearly 50 metres in Sirsaganj area of Firozabad on Sunday. The reason for the brutal act was trivial: he was caught plucking a flower from a plant inside a temple premises. An FIR is yet to be filed.

Dragged over a bitumentopped road, 28-year-old Gopi Kushwaha was bruised all over. People nearby only watched silently. “My son was treated like a stray animal. A muscleman tied him to his motorcycle and dragged him. No one came to his rescue,” said the victim’s father Annar Singh, a farmer.

Police denied the incident, saying Kushwaha was not lugged onto a motorbike and dragged.